Not in the Hallway!

Yesterday has me a bit warn out.  My son had the flu which lead on through the night.  I am a bit groggy but he is feeling better and should be able to resume his normal routine tomorrow.

Over the weekend we learned that Edward Norton is not going to be Bruce Banner/Hulk in the Avenger's movie.  I was really bummed about this.  I also didn't think that the statement from Marvel was very professional.  I have no doubt that it will still be a great story but I thought Norton did a fantastic job and its too bad that they couldn't work towards an agreement.

Comic Con finally released the schedules for Saturday and Sunday.  There were so many events to read about that I cheated and searched for the three I am most excited about:


Green Lantern-- Get a first look at the upcoming sci-fi action adventure Green Lantern, directed by Martin Campbell. Green Lantern is an epic adventure that crosses galaxies to bring to life the legendary Silver Age superhero Hal Jordan, who is chosen by the ring itself to become the first human member of the Green Lantern Corps and take on the vast and powerful Parallax as it threatens to destroy the world. The film stars Ryan Reynolds as Hal Jordan, Blake Lively as Carol Ferris, Peter Sarsgaard as Dr. Hector Hammond, and Mark Strong as Sinestro

6:00-7:00 Marvel Studios: Thor and Captain America: The First Avenger—Producer Kevin Feige and special guests give you an inside look at the ever-expanding Marvel Cinematic Universe. Hall H


We should finally get a good long look at Thor as well as some of both Captain America and Green Lantern.  All movies I can't wait to see and that I fear will be less that amazing.

The All Star Game is tomorrow but as a Cub fan, I don't have much to root for.  It's been a rough year, again, for my favorite team.  However, the game is about celebrating baseball for both players and fans.  This year I think there is even more to enjoy as we are beginning to see the effect of less players doping.  Baseball has seen overall lower scores and less home runs but the pitching has been fantastic and the games very exciting.  I might try and get tickets for next years game as it will be in near by Kansas City.  Let's hope the Cubs have greater participation the next time around.
Posted by Jacob at 8:33 PM No comments:

On the other side of the screen, it all looks easy.

I watched Tron last night for the first time in probably 20 years.  My six year old son joined me and I was surprised how well he stuck with it.  This morning I told him that there was a sequel coming out that we should go see and he said, "I hope it's in new color because that one was in 70's color".  It made me laugh then made me feel old.

I was able to get some quality time in with the Engineer Update for Team Fortress 2.  Of course, now there are 10 engineers on every team.  It's like following a band for years, then they become popular and its difficult to get tickets.  I liked them first, back off!  I didn't realize at first that you can now move your built items which has added a new dimension to the class.  I had planned to put some serious time in last night but ended up watching Timer with the wife, which was real enjoyable.

Star Wars: The Old Republic has finally begun testing.  I was exceedingly disappointed to not be invited this round, as this has been the only MMORPG I've been looking forward to playing since WWII Online.  It isn't released until early next year so there are a few real life things I should focus on completing before as there is little hope in my ability to focus once that day arrives.

As I have been mentioning, Comic-Con is nearly upon us.  They released Friday's schedule which happens to be Star Wars day.  The event I would be most looking forward to is the World Premiere of Batman: Under the Red Hood.  I hope the Saturday schedule has some Avengers on it.
Posted by Jacob at 8:10 AM 1 comment:

Well I didn't get Golden Wrench # 100 but at least the race is over revealing the final components of the Engineer update.  The Gunslinger looks great along with the mini sentry guns it spews.

Although dealing only half  the damage of a Level 1 sentry, it quickly deploys and may offer the right distraction when you really need it.  I can't say I'm not disappointed by this update.  I was expecting something more inventive, this was more, meh, than YEAH!

Comic-Con starts 2 weeks from tomorrow.  I'd really love to attend one of these at some point down the line.  Maybe I can find a way to get in when they have the The Avengers movie panel.  Better start saving I suppose.  Only the schedule for Thursday, July 22nd has been revealed. Some highlights appear to be a glimpse at the new Tron movie, Dead Rising 2, and Curt Schilling's highly anticipated game will be unveiled for the first time.  That alone may be worth the trip.  I look forward to seeing what the following days have to offer.  Perhaps a first look at Thor and Captain America.
Posted by Jacob at 8:50 PM No comments:

So I have been eagerly hunting for my own Golden Wrench that Valve has been dangling in front of my face but haven't been so lucky.  I saw #51 and #52 appear while playing last night which kept me pushing forward. 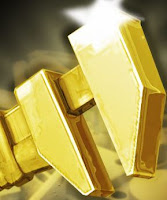 From what I understand, the item is gained through crafting at just the right moment and apparently the drops appear every 1 hour or so.  Maybe tonight will be my lucky night however I am more interested in the engineers new gadgets.  This has always been my role of choice, not only in Team Fortress or TF2 but just about any other game where this archetype is offered.

I recently completed Transformers:  War For Cybertron.  I was excited to get a decent TF game although I felt it could have been better.  I'd give it a 7.5/10.  The multiplayer is pretty exciting but could use the addition of team communication.  They don't even have chat which makes tactical play impossible.  I guess I felt compelled to purchase it in the hopes they will make the follow up which, in theory, should take place on earth.  This should open the levels up a bit more and provide a wider pallet of colors.

Inception is getting additional attention as it's release nears.  Rotten Tomatoes still has it scored at a solid 100.  With that and Scott Pilgrim vs The World coming I'm going to have to put more time in at the gym to make up for the increase of pop-corn consumption.
Posted by Jacob at 6:44 PM No comments:

Nine years ago, I begged for an opportunity to write for www.thekillinggrounds.com and the site administrator, Malachii gave me that chance.  That began the journey that led briefly into mod and indie game development and ultimately into a life as an analyst and a systems engineering.  In a flash I found myself with a wonderful wife, three great kids and an action packed career.
I recently found this domain was available and thought I would use it to blog about life, gaming and what excites me.  I have created it as tribute to the wonderful people I have met in life and the great memories they bring me.  If you come across this Malachii, please give me a shout, I'd love to thank you again!
Posted by Jacob at 5:42 PM 2 comments: